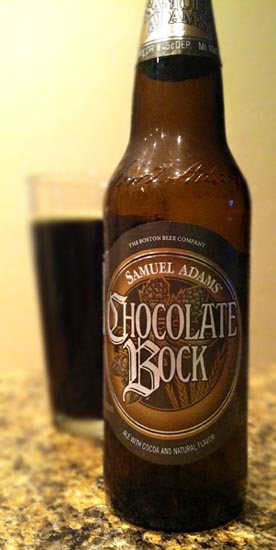 I keep wondering how many beers from Samuel Adams I've actually tried.  I'm willing to bet it's at least 25, yet they keep coming out with new beers!  More for me to try!  Not a bad problem to have.

So up for review today we have the Samuel Adams Chocolate Bock.


The Sam Adams Chocolate Bock is brewed with cocoa nibs and comes in at a respectable 5.8% Alcohol, but a measly 11 IBU's.  Considering that it's a chocolate beer, the low bitterness rating is a little more understandable.  Although, I've had a few chocolate beers that were still quite hoppy, but those are far and few between.  It's been awhile since I've had a chocolate beer.  I'm thinking the last one I had was from Rogue and was a little underwhelming.  But regardless, let's look at this beer...

Samuel Adams Chocolate Bock pours the color of cola with a thin head that disappears incredibly quickly.  It was pretty much gone before I could take a picture.  If you saw a glass of this, without smelling it, you'd likely guess this was Coca Cola, Pepsi, or Dr. Pepper.  That's exactly what it looks like.  Smelling is a different story with medium roasted malt and a sweetness that's a lot like milk chocolate.  Tasting brings a thin-bodied mouthfeel with more milk chocolate and hot cocoa mixed alongside a vague taste of cola and weak coffee, with an underlying maltiness and a smooth finish.

Overall, this is a decent chocolate beer.  Personally I would prefer a bit more chocolate and a heavier mouthfeel.  But then again, I tend to prefer strong flavors and heavier beers given the choice, particularly during the colder months.  This is a chocolate beer that's a bit lighter which actually means you could drink two or three of these in one sitting without feeling like you have lead in your belly.  I guess if that's your thing...