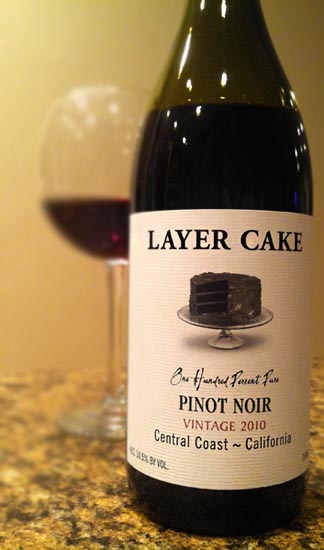 I find Pinot Noir to be one of the more interesting wine varietals.  I think it's because of the huge variance it can have in tastes, much more so than many other wine types.  I'm not saying that's a good or bad thing, it just is what it is.  I've heard this is because it's a difficult grape to work with.

Speaking of Pinot Noir, for today's review  we have the 2010 Pinot Noir from Layer Cake...


Now if you've looked through my wine reviews, you've no doubt noticed that I have reviewed several Layer Cake wines... and have yet to be disappointed in a single one.  That's a mighty feat if I do say so myself.  So, when I received a bottle of Layer Cake's Pinot Noir, my hopes were high!

This wine is out of the Central Coast of California, or more particularly Monterey vineyards at Arroyo Loma and Alta Loma, as well as Santa Barbara vineyards near Los Alamos.  This gives the wine classic Californian Pinot Noir traits.

This wine was surprisingly restrained for a Layer Cake.  Rather than being big and bold like their delicious Malbec and Zinfandel, their Pinot Noir took on a more classy, refined approach.

Like I said, this Layer Cake Pinot Noir has a nice silky mouthfeel, is easy-drinking, and is dare I say... yummy.

This wine is versatile and balanced enough that it could pair well with a huge variety of foods, but it's probably best alongside cake and ice cream.  Afterall, YOU deserve it!  :)