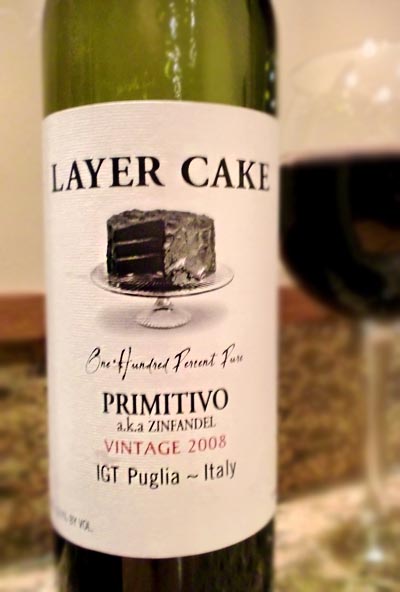 Sometimes I come across beverage companies that are just consistent, with almost everything they put out being above average, sometimes well above average.  Stone Brewing Company comes to mind, where even their worst beers are better than most other breweries typical beer.

Well, Layer Cake wines have reached that status in my mind.  They don't make the most expensive wines nor necessarily the absolute best, but for the money, they're hard to beat.  Every wine they put out tends to be consistent and above (or well above) average.

And remarkably, for what it's worth, the Layer Cake Malbec is one of the few wines I have bought more than once this year.  So that's saying something.

But for now, I'm looking at Layer Cake's Primitivo, which is an Old Vine Zinfandel produced in Manduria, Italy.  Like I've said before, Layer Cake has somebody with good tastes sourcing their grapes.

The 2008 Layer Cake Primitivo (Zinfandel) pours an inky, dark, dark purple that verges on being black.  It's that DARK.  It has aromas of blackberries, plums, pepper, and Maduro-wrapped cigars (my favorite).  Tastings brings about more dark, dark berries and jam, cocoa, tobacco, hints of leather, and a bit of spicy cinnamon, with a velvety thick mouthfeel and a bit of chewiness.

Bottom line this is a big, dark, decadent Zinfandel.  It has a surprising depth of flavors going on, without being overly oaked and boozy like many California Zinfandels.  It's another Layer Cake winner.

I thoroughly enjoyed it.  That's all I need to say.

Drink This: if you want an extremely dark, rich Zinfandel.
Don't Drink This: if you're looking for an oakier, California-style Zinfandel.  This one is quite dark, but still has a bit of jamminess to it.  But, it's definitely worth trying.