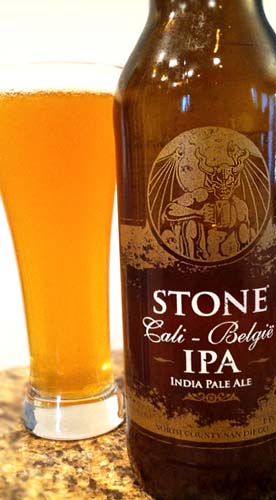 Usually Stone Brewing Company never lets me down.  But maybe I'm getting bitter and old or maybe I'm becoming a beer snob because this time they have.  Sorry, Stone Brewing.

Let's cut to the chase.

Stone Brewing's Cali-Belgie IPA pours a mildly hazy, dark straw color with a thin, quickly dissipating head.  It smells of sweet, sweet hops with touches of florals.  Tasting brings milder flavors than I'm used to from Stone Brewing with sweet mild hops, a dank sweet maltiness, some tropical fruits, and hints of banana esters.  The finish is short and unremarkable.

Honestly this is FAR too tame for a Stone Brewing beer.  Yes, it has characteristics of both a Californian IPA and a Belgian beer, but both aspects are just weak.  Were both the Belgian and California IPA aspects kicked up a few notches this would be one helluva beer.  As it stands it's not bad, not great.

Sorry, Stone Brewing, this one was a let down.