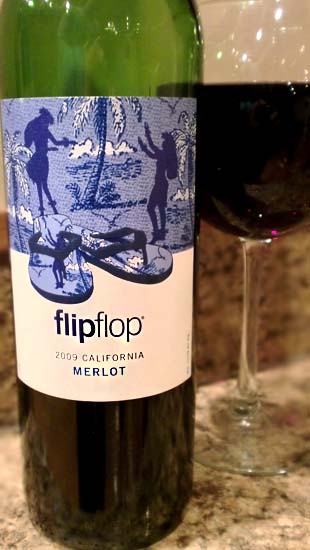 You never hear people raving about Merlot.  Perhaps that movie, you know the one I'm talking about, ruined it forever.  I'm not saying Merlot is my favorite wine variety either, although I have had a couple really good Merlots this year.


This is the 2009 Flip Flop Merlot out of California.  It's another budget wine.
We're talking cheap.
Like $5 a bottle cheap.
At that price, you can't expect too much.

It pours a dark ruby red and has aromas of plums and raspberries.  Tasting reveals exactly what the nose already told us: sweet plums, raspberries, and a hint of vanilla.  Tannins are pretty much nonexistent.

This is another cheap, simple, unoffensive wine.

There are no off flavors here, but conversely there are no interesting flavors or anything to really hold your attention.  It's just another sweet, simple, plum-centric Merlot.  This would be good to serve at a party so that anyone who drinks red wine could have a drink.  But it's not going to be a wine people will be paying much attention to.  Yet at $5 a bottle, it's hard to complain...