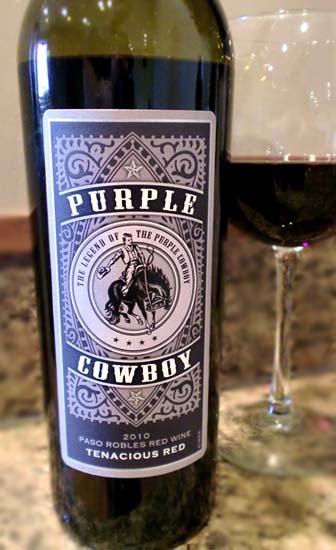 In an extremely juvenile way, I find that name kind of funny.  I almost want to make a Brokeback Mountain reference or tell a dirty joke.  The name just sounds like some sort of innuendo.  Purple Cowboy.  My wife actually didn't believe me at first that this was the wine's real name.  True story.

Purple Cowboy is supposedly named after a group of early California cowboys/winemakers who made dark wine which stained their teeth purple.  I don't know if that's true, but the name certainly gets your attention.  And again, I kind of want to tell a dirty joke.

Anyway, this is the 2010 Purple Cowboy Tenacious Red, a Californian Cabernet-Syrah blend.  It pours a dark purple (imagine that!) and has strong aromas of blackberries, black cherries, and a touch of spice and leather.  Tastings brings sweet cherries, dark fruit, and chocolate followed by an unusually short finish.

This is a confusing wine for me.  It smells dark, luscious, and sinful but tastes very sweet and cherry-forward with a short finish.  Meaning it smells much better than it tastes.  Now there's nothing awful about it and it's certainly quite drinkable, but it tastes kind of ordinary, especially following the delicious aromas.

But perhaps at least, it'll stain your teeth purple so you can throw on your sexy chaps and dance around like a Purple Cowboy.  Or something.

Drink This: if you want a reasonably cheap Cabernet-Syrah blend that tastes of sweet cherries, but smells luscious and dark.
Don't Drink This: if you're not down with the Purple Cowboy.  And I don't really know what I mean by that...