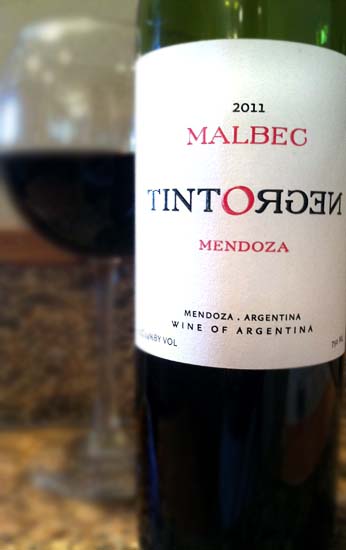 Ohhhhhhh yes, another Malbec from Argentina.

This bottle is the 2011 Tinto Negro Malbec produced by Bodega Cruz de Piedra out of Mendoza, Argentina (like a TON of other Malbecs).

The weird thing about this wine is that it has a screw top instead of a cork.  Every time I get a bottle with a screw top I can't help but think it's not going to be all that great.  I know it's just a superficial thing, but having a screw top always makes the wine feel less desirable from the start.  Maybe I'm the only person who this happens to.  I can't help it.  I'm human.

This isn't quite as jammy as many other Malbecs, it's a bit more tart.  But it does have a fair amount of the savory, earthy, rustic qualities that make good Malbecs interesting.

Bottom line this is a good, solid Malbec that really shouldn't have a screw top.
It's better than that.

This isn't my favorite Malbec, but at around only $10 a bottle, it's a great deal.

Drink it while eating red meat or game.  Or alongside a dark, oily Maduro-wrapped cigar.  I'm getting thirsty just talking about it...

Drink This: if you want a tart, savory Malbec.
Don't Drink This: if you don't like rustic, earthy wines.  I could see this wine being very polarizing.  Like many similar Malbecs, you're either going to love it or hate it.