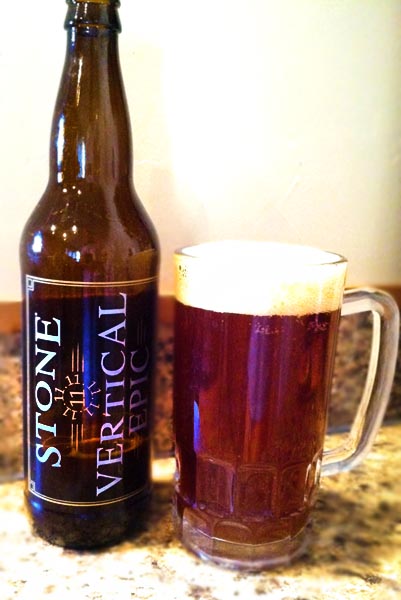 I've already professed my love for Stone Brewing Company too many times.  They make so many damn good beers that it blows my mind.

So, let's make this short and sweet.  Here's another annually released beer from Stone Brewing, their Vertical Epic 11.11.11 which is a bottle-conditioned Belgian-style Strong Pale Ale brewed with cinnamon and green Annaheim chillis, with a respectable 9.4% alcohol and a moderate 65 IBU's.

Yes, cinnamon and green chillis.  In this beer and in your belly.

The Stone Vertical Epic '11 pours a dark reddish mahogany color with a big, creamy off-white head.  It smells of cinnamon, caramel, and hints of spices and bananas, which reminds me of a Bananas Foster.  Tasting brings more of those Belgian banana notes, a gentle warming heat, Christmas pie spices, sweet caramel malts, hints of butterscotch, and mild hops in the finish, with a touch of the chili heat mixing with the 9.4% alcohol in the aftertaste.

To say there's a lot going on here would be an understatement.  No joke.

But is it epic?
I'm on the fence with that.  In complexity, yes.  In smack-your-tongue-hardcore-beerness, no.

Drink This: if you'd like to try a complex Belgian Beer that has characteristics of a Winter Warmer and a Chili Beer.
Don't Drink This: if your favorite beer is Bud Light.  Sorry, this isn't for you.