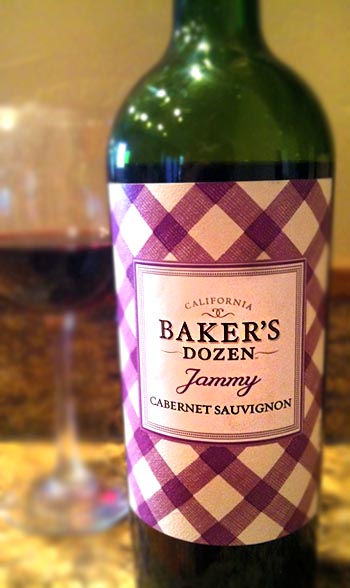 Sweet wines are certainly gaining more popularity, especially if you look at all the new sweet reds and Pink Moscatos in the market.  And hey, there's nothing wrong with that.  It's just a natural shifting of the trends, I suppose.

So, what we have here is another sweet red.
This is the Baker's Dozen Jammy Cabernet Sauvignon.

Now, with the word jammy on the label, you're not going to buy it expecting a big, dry Cab.  And from a winery like Baker's Dozen, I guess jammy is only fitting.  This is another non-vintaged wine out of California.  I feel as though I've been reviewing a ton of Californian wines lately for some reason, but that's beside the point.
Okay, enough rambling, let's taste this wine.

This is so juicy and jammy, that it almost doesn't even taste like a Cabernet Sauvignon.

It's almost as if a sweet desert wine, a standard Cabernet, and a strawberry pie had some sort of drunken menage a trois and this is the resulting love child: the Baker's Dozen Jammy Cabernet Sauvignon.

That being said, it's not awful and it would probably go well with some sort of pie or ice cream, especially if you're in a mood for SUGAR.  But, it's miles away from most Cabernets out there in terms of style.

(*Check out my other Cabernet Sauvignon reviews here.)