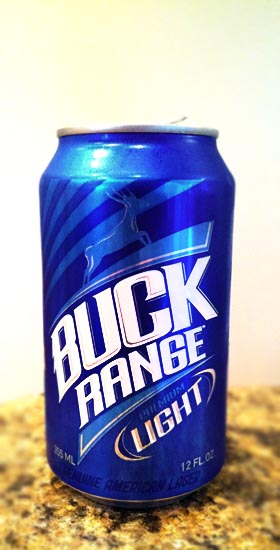 Not too long ago I was getting a couple groceries and decided I would swing by the beer aisle to see if there was anything new or seasonal.  And what did I find?

I looked at the 12 pack and thought, "Hey another cheap ass beer and it's only $6 a 12 pack!"  It seemed worth a try at that price, afterall I have paid more than twice that for an awesome single craft beer many a time.  At only $6 I was kind of thinking it might be malt liquor, actually.  And being geared toward hunters and outdoorsmen, that was totally possible.

I got home and opened one up.  Tasted it and thought, "Wow, this tastes like water.  Seriously, like... water."  I looked it up trying to figure out who made it and anything about it.  Turns out, this is a beer that is sold exclusively by a few grocery store chains owned by SUPERVALU including Alberstons, Jewel-Osco, Cub Foods, and Farm Fresh.  The breweries that make it, Genesee and Dundee Brewing companies, both don't list it on their websites.
Can anyone say... embarrassed?

Adding fuel to the fire is the fact that this beer is only 3.6% alcohol.  So not only is it watery, it has pretty much no alcohol.
But hey, at least the can is blue.

Buck Range Light pours an extremely light urine-colored yellow with a super thin fading head and smells of only hints of light malts and a vague skunkiness.  It tastes, as I said before, incredibly watery with hints of typical American light lager flavors, vague light malts, and tap water (think 50% water, 50% Bud Light).  It has pretty much no aftertaste and is so over-carbonated you'll be burping and feeling full of air for quite some time.

I know a guy who supposedly drank 18 of these in one night and didn't get a buzz.
And I believe it.