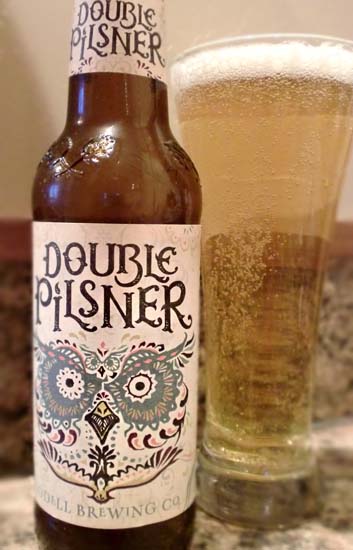 This is the fourth beer from Odell Brewing that I have formally reviewed.  The others were their standard IPA, their Myrcenary IPA, and their signature 90 Shilling Ale.

It would be easy to say I have a love-hate relationship with Odell Brewing's beers.

One thing they do well is their IPA's.

Their Myrcenary IPA is one of my favorite IPA's and their standard IPA is a well-above average, solid IPA.  They make a couple other seasonal and limited IPA's which are good as well.  The downside to Odell Brewing is that their signature 90 Shilling Ale and a lot of their other standard beers just aren't that spectacular.  Maybe their IPA's are so good that it makes me assume their other beers will also be amazing.  I don't know, but for whatever reason I'm not a huge fan of their beers other than their IPA's.

Regardless, here's another from Odell Brewing and a chance to potentially redeem themselves, their Double Pilsner.  This beer has a moderate 40 IBU's and a respectable 8.1% ABV, both of which are pretty high for a pilsner.  Now you would think with both of those things going for it that this would be a pretty good pilsner... Well, we will see about that.

Honestly, I'm surprised by this beer.  I guess I should have known it, but thinking of Odell's gloriously delicious IPA's always sets the bar too high for the other beers from this company.  This beer tastes pretty... boring.  I was expecting to have one of the best pilsners I've had in awhile, but instead I got something that was akin to Budweiser mixed with some Steel Reserve.  Not to mention that those reported 40 IBU's are hiding somewhere far away from my tongue.  I admit, though, it's going to be hard to make an American-style Pilsner taste amazing.  They're kind of boring and watery just by their very nature.

At least this beer is 8.1% alcohol so at least you'll feel you got more for your money even if it is lackluster.  Personally for the money, I'd rather buy Steel Reserve.  It's also 8.1% and is sweet and malty, but you can buy four cans of that for the price of one of these.  Just saying... Not that Steel Reserve is all that tasty, but neither is this.

Drink This: if you'd like a strong, watery American-style beer.
Don't Drink This: if you're looking for something that doesn't taste like water.  If you're going to drink beer from Odell Brewing, I suggest sticking to their wonderful IPA's.