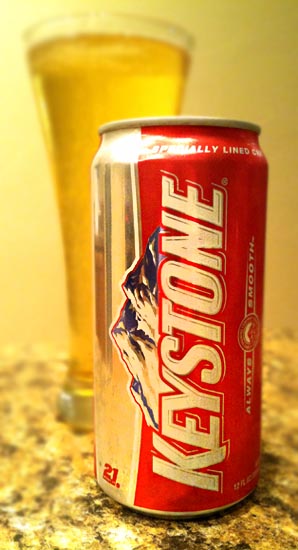 It's weird that back in the day, before I knew what good beer was, I always had friends around who drank Keystone Light or Keystone Ice.  But surprisingly I rarely, and I mean rarely, ever saw the regular Keystone.  And by regular Keystone, I mean the one in the red can, also oddly known as Keystone Premium.


Now I haven't a clue in Hell as to why it's call Keystone Premium.  What makes it premium?  Nothing as far as I can tell.  But the can is red and shiny, so it has that going for it.  Not that any of these labeling shenanigans really matter.

Speaking of Keystone and the makers of it, Coors Brewing Company, I highly recommend going to the brewery.  It's in Golden, Colorado not too far outside of Denver and it's actually really interesting and more importantly, FREE.  Not only is the tour itself free, but so is the BEER at the end of the tour.  Two glasses of free draught beer per person.  Now that's something I find awesome.  Not that Coors makes the best beer, but free beer is always good beer.  I've heard that a lot of college students take a shortcut through the tour using the stairs, that way they can get straight to the free beer then go back and do it again.  Now that's working smarter, not harder.

Anyway, I was at the store recently and saw that they had the Keystone Premium and I figured, hell, why not buy some.  I haven't had this stuff in years.  So I picked up a 30 Stone case of Keystone, put on my camouflage, turned on some 80's rock, stroked my mullet, and got to drinking.  Okay, so maybe not all of that happened.

But the drinking definitely did.
And the mullet stroking.

Speaking of awesomeness, WTF is up with Keystone's mascot, Keith Stone?!  Do people nowadays see him in the ads and actually think, "Hey, I wanna be like that guy!" because if so, maybe Armageddon is really going to happen when the Mayan calendar ends next month.  And it's probably just to cleanse the earth of the people who are persuaded by Keith Stone ...and those who watch Teen Mom.

Just sayin'.
Keystone Premium pours the classic piss yellow of most cheap mass produced American lagers with a remarkably thin and quickly disappearing head.  Now I don't know if it always has such a thin head or what because who has ever poured Keystone into a glass instead of just drinking it from the can?  Apparently just me.  It smells of vague light malts, airy, and pretty nonexistent.  Tasting is pretty damn boring: more light, light malts, a hint of grain and minerals and the tastes of bottled water, with a slighter thicker mouthfeel than Keystone Light and a bit softer and less crisp feel than Keystone Ice.  The finish is short and doesn't linger, which in this case is a good thing.

Other than the mouthfeel differences between the three Keystones, they all taste pretty damn boring and similar.  Personally, I like Keystone Ice better than Keystone Premium.

The one good thing I can say is that on a blazing hot day, an ice-cold Keystone is hella' refreshing.  Yes, I said hella'.  It's not good beer by any means, but refreshing yes.  And I'm going to keep saying hella' because it's my hella' awesome alcohol website and I do what I want.  Plus drinking Keystone Premium makes me want to say hella'.

As far as hella' cheap beer goes, this isn't the worst beer nor is it the best.  But also it's not something I'm likely to buy again anytime soon.  Unless of course those Keith Stone commercials start to brainwash me...