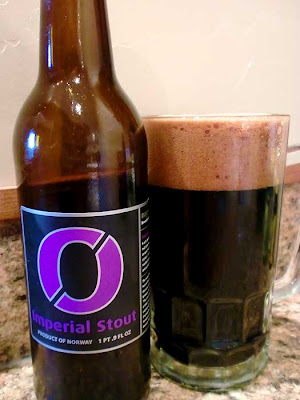 Nøgne Ø Imperial Stout
Bottle Conditioned
IBU's: 75
Alcohol: 9%
When I think of Norway, I think of Black Metal.  That's right, those headbanging, leather-clad, spike-wearing dudes with faces painted black and white, screaming hymns to the Dark Lord himself!  To me, that's Norway.  I'm sure it's a beautiful country, but it has to be awfully cold and dark there.  That's why it's only fitting that an Imperial Stout from the land of Black Metal would be ridiculously dark and devilishly warming.  And guess what? It is.
Nøgne Ø is the largest bottle-conditioned beer brewery in Norway.  The name translates as "naked island," which they claim is a reference to the, "countless stark, barren outcroppings that are visible in the rough sea off Norway's southern coast."  They actually make quite a few different beers, most of which I've heard are quite tasty.


The Nøgne Ø Imperial Stout pours black as sin, with a crazy dark brown head.  No light is getting through this nectar from the land of the dark, cold North.  It smells awesomely strong of dark chocolate, anise, some fruitiness (plums and black cherries, perhaps?), and some burnt background notes.  You take a swig and get exactly what you're expecting: dark and semi-sweet chocolate, black cherries, deeply roasted almost-burnt malts, espresso, and a mild bit of hops at the very end.

This is easily one of the darkest, heaviest, gloriously delicious brews I have had in quite some time.  And I have quite a few really great beers each week, so that's saying something.  This is not an everyday beer.  This is a brew for those cold, bleak, rainy nights when you want to stare into the darkness, while taking small sips of liquid warmth.  Nøgne Ø Imperial Stout is truly a great Imperial Stout.  But then again, I'm a fiend for Imperial Stouts.  Cheers, my friends...

Drink This: if you want a liquid slice of warming darkness.
Don't Drink This: if you are weak.  This beer is such a far departure from American Macro Light Beers that I don't even know if the universe would let them exist side-by-side in the same refrigerator.