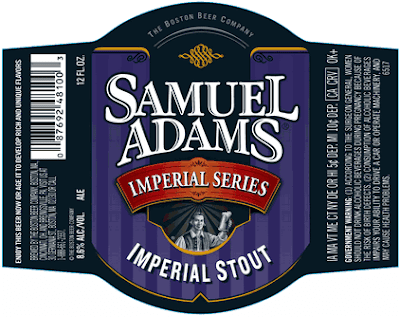 Samuel Adams Imperial Stout
Russian Imperial Stout
Boston Beer Co. (Sam Adams)
IBU's: 50
Alcohol: 9.2%
Like I've said before, I love Imperial Stouts.  There's something about sipping the thick, rich, dark roasted, chocolately, coffee-esque brews that makes me a happy, happy guy.  So naturally, the fact that Samuel Adams makes an Imperial Stout means I was certain to try it.  I have already reviewed two others in Samuel Adam's Imperial Series, their Double Bock and the Imperial White.  Each of which is totally different from one another, yet all really, really flavorful and tasty.  And as I've said before, that's pretty surprising coming from such a mainstream brewery.  I'm hoping to try their Wee Heavy, a Scotch-style Imperial Ale, in the near future, but we will see if that happens. 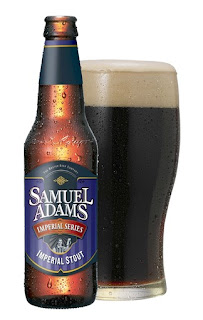 Anyway, for now we are looking at Samuel Adams' Imperial Stout.  This is a Russian-style Imperial Stout bottled at a respectable 9.2% alcohol and having a moderate 50 IBU's.  As far as bitterness goes for more extreme beers, this is rather mild.  And once again, the alcohol in my 4-pack was 9.2% whereas the label pic shows less, at 8.6%.  What the heck, Samuel Adams.  Was my 4-pack the older or newer recipe?  Guess it really doesn't matter that much, I'm just curious.
Samuel Adams Imperial Stout pours a deep, deep brownish black, that's almost totally opaque with a thick, dark tan head.  Not the darkest beer, I've seen, but it's up there.  It's thickness is evident as it pours and you swirl it.  This Imperial Stout smells pretty subdued, with some dark roasted malts, and a bit of chocolate and perhaps dry licorice.  Hops are tucked away.  It tastes like lightly smoked dark chocolate, dark roasted coffee, and a lingering bit of boozy alcohol.  The best part is the thick, creamy mouthfeel that really is quite wonderful and luscious... if you're into that sort of thing.
In the world of craft brews, this is a pretty solid, classic-style Russian Imperial Stout.  It's not earth-shattering, or awe-inspiring, but it is very, very good... assuming you enjoy thick, dark, flavorful stouts.  Have I had better Imperial Stouts? Certainly.  Have I had worse?  Oh Hell yes.  Far too many.
Drink This: if you want a classic-style, good example of a Russian Imperial Stout.
Don't Drink This: if you want a hardcore, over-the-top Imperial Stout.  This is pretty standard and straight-forward for an Imperial Stout.  But even then, most pansy beer drinkers are going to think this is too strong and dark-roasted.  But hey, I think it's delicious.  They can stick with their Natural Light and Olde English 40's...
Posted by Unknown at 9/06/2011