360 Vodka
Grain Vodka
Earth Friendly Distilling Company
40% Alcohol (80 Proof)
With the whole "Green" movement and many trying to be more eco-friendly, it only makes sense that this would eventually hit the world of distilling.  360 Vodka is produced by the Earth Friendly Distilling Company out of Weston, Missouri.  It's claim to fame is its environmental friendliness: with the bottle being 85% recycled glass and the paper being 100% recycled and chlorine-free.  They also claim to use a four-column still that 200% more energy efficient than standard stills.  Their marketing materials are 100% recycled, the billboards are biodegradable vinyl, and the website is reportedly powered by "renewable" energy.  Talk about a mouthfull.  I'm really not sure if the extra production costs for all this "green" hype really equate to the environmental benefits it claims, but that could lead into a long debate, itself. 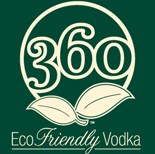 360 Vodka is distilled four times, then filtered five times.  That sounds pretty typical for premium vodkas.  HOWEVER, it's not filtered through charcoal... but through granulated coconut shells.  Yes, freaking coconut shells.  Freeeaaaking coconut shells.  Think about that for a second.  As far as the actual drink goes, it pours crystal clear like most other vodkas and smells pretty mild, with a bit of the typical vodka/rubbing-alcohol-type essence.  It tastes pretty clean, maybe a bit metallic and sweet, but finishes only moderately smooth.  It really is quite average in the world of mid-level vodkas.  Nothing remarkable here, except for being "green" and having a bottle with a neat metal swingtop.  Apparently if you mail the top back in, they re-use it and make a donation to an environment cause.
Drink This: if you want to be "green" while getting your drink on.
Don't Drink This: if you're looking for a high-quality, super smooth vodka.  Personally, I'd rather have both Russian Standard Vodka (for its creaminess) or 44° North Vodka (for its smoothness) over this for drinking on the rocks or in a cocktail.  Even then, though, it's not terrible, just mediocre.
Posted by Unknown at 9/06/2011