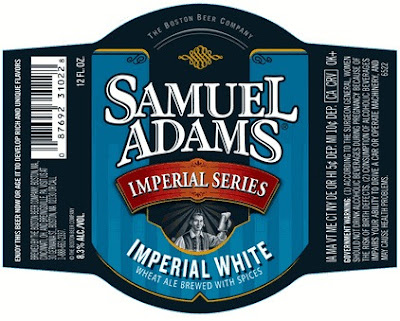 Samuel Adams Imperial White
Belgian Witbier Brewed with Spices
Boston Beer Co. (Sam Adams)
IBU's: 20
Alcohol: 10.3%
For some reason, I'm not generally a huge fan of wheat beers.  They're not bad, but they tend to all be too similar and sometimes a bit too bland.  Certainly there are a few standout breweries that can make tasty ones (Widmer Bros. for example).  So, when I saw that Samuel Adams had an Imperial White, I was a bit hesitant to try it.  Luckily for me, I did.

This Imperial White is another in Samuel Adams' Imperial Series which includes four different beers (Imperial White, Imperial Stout, Double Bock, and a Wee Heavy).  I previously reviewed the Double Bock, which is a malty glass of high ABV goodness.  Don't ask me why the label in the picture up top says 8.3% alcohol, my 4-pack were all 10.3%.  I do know they had made revisions to the recipes for the beers going into the Imperial Series.  The Double Bock went up a couple percent in alcohol, too, for its new iteration.

The Imperial White pours a cloudy, dark gold, almost copper hue, which is actually a bit darker than most wheat beers.  It smells of strong, sweet malts, orangey citrus, and LOTS and LOTS of spices (coriander and nutmeg, among others).  You take a sip and you get an explosion of sweet malts, sweet citrus, moderate hops, and a mouthful of spice.  The 10.3% alcohol is present, but like the Double Bock, it actually helps cut through some of the maltiness and sweetness, giving it a unique balance.  It leaves a spiced, lingering, oddly citrusy aftertaste.  It sounds freaking crazy... and that's because it is.  Freaking crazy over-the-top delicious.

I have to commend Samuel Adams for making something this flavorful and bold.  The Imperial White is probably the best overall wheat beer I've tried, and that's saying something because I have tried quite a few.  Over the top malts, over the top spices, and over the top alcohol, while somehow not becoming cloying... instead become AWESOME.
Don't ask me how come I like it so much, but I do.  I really, really do.

Drink This: if you want an over-the-top spiced wheat beer experience from a brewery that is mainstream, yet continues to release awesome craft beer-style brews.
Don't Drink This: if you are most people.  This is not a brew for everyone.  It is totally unique and almost doesn't taste like a wheat beer.  The spices, especially, will be much too strong for many.  It almost reminds me of a spiced Christmas Ale seeing as how heavily spiced it is.

If you decide to try it, let me know.  I'm certain Samuel Adams Imperial White will be an extremely polarizing beer.  You will either hate it or love it.
Cheers!
Posted by Unknown at 9/04/2011