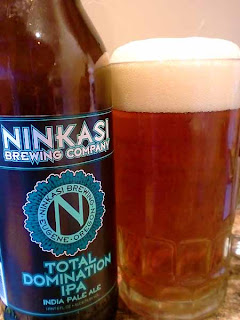 Total Domination IPA
Ninkasi Brewing Co.
IBU's: 65
Alcohol: 6.7%
Alright, so here's the deal, when a brewery gives a beer a badass name, I assume that... well, it's going to be one badass mother of a beer!  Why in the Hell would anyone give a beer an over-the-top name if the beer was anything but?  Seriously.  Maybe they are just trying to get fools (like me) who fall victim to cheesy names and silly gimmicks to buy it.  And yes, it worked.  I bought this beer.  Damn it.
This is Ninkasi Brewing Company's Total Domination IPA.  They are based out of Eugene, Oregon, blah, blah, blah.  Bottom line, I'm disappointed in this beer.  Can you tell?
Total Domination IPA pours a hazy dark golden hue with a decent head.  It actually looks like a good IPA should.  It's smell is rather muted, with a mild dose of dry hops and a bit of pine.  Tasting it gives way to a moderate amount of hops, some mild grain-taste, and a mild citrus peel ending.
It's not bad, but it's just a regular old, generic-tasting India Pale Ale.  This is NOT something that should be called "Total Domination," more like "Total Average IPA."  I could let this beer get by with this name if there was something, or anything, totally dominating about it.  Maybe if the IBU's were 100+.  Maybe if the ABV was 10% or greater.  Maybe if it even had some decent label artwork.  But unfortunately no, it has none of the above.  Weak sauce.
Drink This: if you want a boring, standard IPA with an extremely misleading name.
Don't Drink This: if you think this is going to "totally dominate" your tastebuds.  There's nothing bad tasting about this beer, but seriously, Total Domination IPA?  Sorry, but no.  Drink some Leafer Madness or Ruination if you want a totally dominating IPA...
P.S. Ninkasi Brewing, if you do decide to make a new, actually dominating version of this beer, send one this way.  Because this one is disappointing and the name is a bunch of bull.  Have a nice day.
Posted by Unknown at 9/03/2011