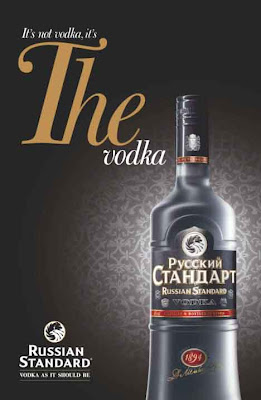 The original Russian Standard Vodka is made from winter grains from southern Russian.  They distill the winter grains four times, then charcoal filter the remaining distillate four times before adding water to lower it to bottling proof. It pours crystal clear, as with most unflavored vodka (well, except for black vodka, but we will look at that another time) and smells quite neutral, if not a little soda water.  Tasting it reveals the typical neutral grain spirit taste (rubbing alcohol?) with hints of minerals.  It ends a little harsh, but not awful (if you want something that ends smoother, check out 44° North Vodka).  The amazing thing about this vodka, however, is the mouthfeel.  For whatever reason, this vodka has a very thick, creamy mouthfeel even at room temperature.  This seems to be pretty common for several of the better Russian and Polish vodkas.  Perhaps this is from the winter grains they use in that part of the world?  Regardless, this is a decent-tasting vodka with an exceptional mouthfeel.  Most people will drink Russian Standard as shots, but it's good enough for having on the rocks... and even better paired with borscht.
Drink This: if you want a classic, Russian vodka with a creamy mouthfeel.
Don't Drink This: if you want a super-smooth vodka.  This ends a little rough, but the creamy texture more than makes up for it.
Posted by Unknown at 9/03/2011