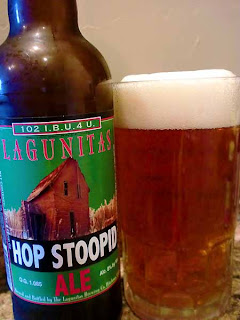 Lagunitas Hop Stoopid Ale
Imperial IPA
IBU's: 102
Alcohol: 8.0%
The Lagunitas Brewing Company is out of Petaluma, California and they make several really great brews.  Not all of their beers are super amazing, but when they get it right, they get it perfect.
One of Lagunitas Brewing's more famous beers is their Hop Stoopid Ale, an Imperial Pale Ale (bordering on an American Strong Ale due to the maltiness) with a respectable 8.0% ABV and a reported 102 IBU's (bitterness units).  Like I've said before, the research shows most people cannot taste anything different in IBU's past 100, but going above this does give the beers more aroma, and of course, some bragging rights.  If you look at the top of the label, it says "102 I.B.U.4.U."  Funny Lagunitas.  At least they don't take themselves too seriously.

Anyway, Hop Stoopid Ale pours a hazy, dark golden almost amber hue.  It smells deliciously hoptastic: strong, sweet, piney, grapefruity hops, hops, and more hops.  You take a sip and you are greeted with a thick, malty, hop bomb with a great depth of hop notes ranging from dry citrus peel to sweet pine notes.  It leaves a long-lasting bitterness in the finish that is dry enough to make you want another sip.  And then another.  And another.  This is what an Imperial IPA should taste like, without going completely overboard.  Hop Stoopid Ale isn't just a one note IPA.  It is complex, deep, and doubly delicious.  Drink it!
Drink This: if you want a thick, well-balanced, deeply hoppy, delicious, golden perfect example of an Imperial IPA.  This is for the IPA lovers.
Don't Drink This: if you aren't into hops.  Hop Stoopid Ale is hoptastic and will give rookies the bitter beer face.  But, boy oh boy, if you love hops, this is yummy stuff...
Posted by Unknown at 9/03/2011